The sun finally peaked out, illuminating the once gloomy backyard and as soon as my kids got a glimpse of its radiance, they wanted to go outside. I was adamant as they had already gotten ready for the day and the previous days rain had left behind dirt and puddles and the things that can take a few minutes to unravel any semblance of tidiness that they had. I allowed them to, for when I give them the chance to have unstructured outdoor play time, I am able to recognize how vital it is to their overall development and mood.

It wasn’t long before screams and shrieks filled the backyard in wild abandon and I ran outside to see what the commotion was all about. There sat  my children who, like i mentioned before, had just gotten ready for the day, bare feet, dirt already smudged on their cheeks, soiled clothing; around a frog, looking at his jumps, trying to catch him, talking about his characteristics and then begging me to keep it. They were unfazed at their appearance and their interest shifted from the outfit they HAD to wear to the amphibian they NEEDED as a pet.That didn’t happen as I explained to them the frog needs to live in its natural habitat. What did happen though, is that the youngest of the lot who were playing, picked it up and i was there at the right time to stop him from “kissing the frog” which is what that popular Disney story encourages, as far as a child is concerned. A frog is a frog, they don’t understand the connotations.

They also used backyard items to make individual collages which I thought was a creative idea on their part. 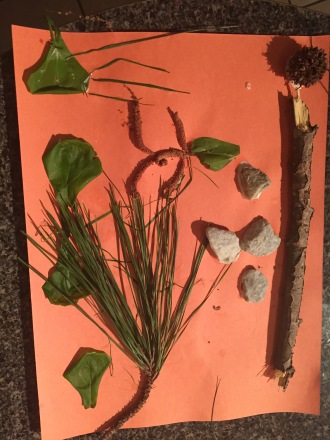 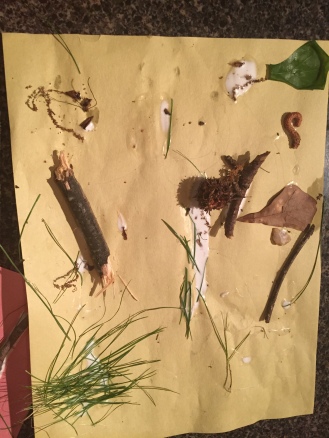 Of course, that lent way for another load of laundry and another shower and while I don’t always have time for these random events, the days that I do makes me feel like a winner.

To read more about the benefits of outdoor play, please click here.